What is the actual message of Eagles Over Berlin?

In the present time of terrorism and war, when we are permanently questioning our actions and looking for the best solution, the historic lessons of that period are clear:


• Firm determination and tenacity could bring military victory without bloodshed.

• There is no shame to export such values as freedom, democracy, civil rights and progress.

In 1948, the Allied Powers were able to create a strong unity and stopped the advance of dictatorship. Without that determination, the map of Europe would be different today.

Democracy, freedom, civil rights and progress are the basic principles of humankind! I hope “Eagles over Berlin” will help to create a new alliance against another, even more terrifying enemy — terrorism by highlighting our common values.

Posted by Kati Fabian at 7:30 AM No comments:

Berlin Tempelhof – The airport of the Berlin Airlift

Berlin's Tempelhof Airport last year marked the 60th anniversary of the end of the Airlift.


Those, who as young men were involved in the Berlin Airlift, serving as aircrew on the non-stop flights that operated in and out of the city's Tempelhof Airport, would love to go back to Berlin and see how the airport has changed. The famous airport, however, does no longer operate, but there is still something to see. The airport may have closed, but Tempelhof has become effectively a memorial to the heroism shown during the Berlin Airlift by British and American aircrews and pilots.

When the Soviet Union decided to blockade Berlin in June 1948, the city depended on the British and American airlift to supply its needs - particularly food and fuel.

Last year the airport marked the 60th anniversary of the end of the Airlift and earlier this year, the runway area opened as the city's biggest park - three times the size of London's Hyde Park. Everything remained exactly as it was when the airport operated its last flight in 2008, including the carefully marked runways and the radar tower.

In fact, Tempelhof has a significant place in aviation history.

As a parade field, Tempelhof witnessed the first demonstration flights by the Frenchman, Armand Zipfel, followed by pioneer Orville Wright in 1909. Tempelhof’s reputation in aviation was born, however, its designation as an airport did not arrive until 1923. Lufthansa was founded here in 1926 and the following year Tempelhof became the first airport in the world with its own underground station - now called Platz der Luftbrücke. 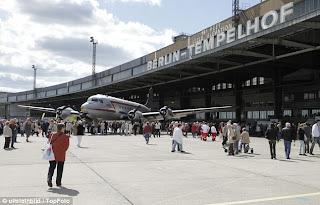 Posted by Kati Fabian at 4:20 AM No comments:

Motivation for the story: Rebirth after Destruction

Since I was an eyewitness of the tragic events in New York City on September 11, 2001, the heartbreaking moments were the motivation to write the book.


On the afternoon of that tragic day, I was walking on the empty Fifth Avenue, in the city that never sleeps, now only a ghost town. The beautiful weather and still warm sunshine were full of sadness. It was as if the tender sunshine was gently welcoming the thousands and thousands of souls died on that day. In the warm of late summer, I was cold, so cold…

As so many others, the events blocked me for a week in New York. After the tragedy, slowly, life returned in New York. When some days later, I was standing on the same place, looking to the truck transporting the firefighters and steelworkers with exhausted faces, in the middle of the usual jump traffic, I felt that life took over.

'Life is always taking over,' I thought.

Rebirth after destruction, the survival and the strengthening of our basic values, these are the principal elements of the novel.
Posted by Kati Fabian at 6:06 AM No comments:

Buy it on AMAZON

Buy it on AMAZON

Find it in EBOOK Format

Eagles Over Berlin in EBook

Find it in Barnes and Noble

Eagles Over Berlin with Barnes and Noble